FORD BRONCO: THE RETURN OF THE LEGEND

Donnelly Ford | FORD BRONCO: THE RETURN OF THE LEGEND 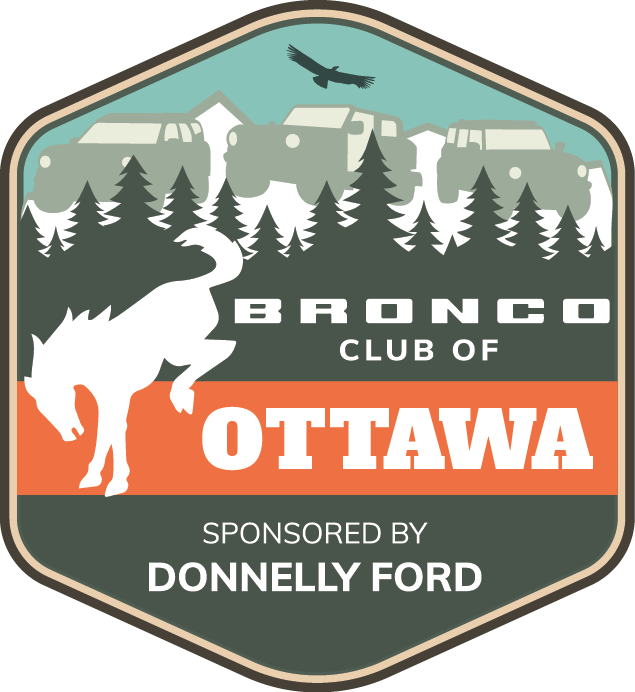 Welcome to the Bronco Club of Ottawa – a place where Bronco owners can come together as a community across Eastern Ontario. If you didn’t purchase your Bronco with us at Donnelly Ford – no problem at all, all owners are welcome with a no-charge entry. We’ll be running a blog and Bronco Club group on our Donnelly Ford Lincoln Facebook page where owners can share everything BRONCO – whether it’s the ownership experience, recent news and updates, aftermarket builds, or awesome roads and trails you find on your Bronco adventures. At the Bronco Club of Ottawa, members will also be able to receive lots of perks including

Click Join Now and be apart of the Bronco Club of Ottawa!

The envy of truck enthusiasts a few decades ago before the automotive industry coined the terms SUVs and CUVs, is officially back – more efficient, rugged and outstanding class leading performance.

The modern-design of the all-new 2021 Ford Bronco SUV marks Ford's return to its muscular truculent roots.

Whether in a 2-door or 4-door version, the new Bronco promises to be the most surprising, and most sought-after vehicle of the year. Its unique modern throwback styling and spectacular capabilities have made the Bronco the most sought after new vehicle launch this year.

Inspired by the past, but equipped with the most modern of technology features including a choice of between fuel efficient and performance powertrains, the Ford Bronco will be your adventure companion for everything between the city, gravel roads and everything in between.

Under the hood, there's a choice of either a 270 hp 2.3-litre EcoBoost I-4 or a 310 hp 2.7-litre V-6. Both can be paired with Ford's 10-speed automatic transmission, however, enthusiasts take note: the 2.3-litre engine can even be paired with a seven-speed manual transmission. One of those gears is a low-speed gear specifically intended for serious off-roading.

With six available options and trims there is a Bronco made just for you! 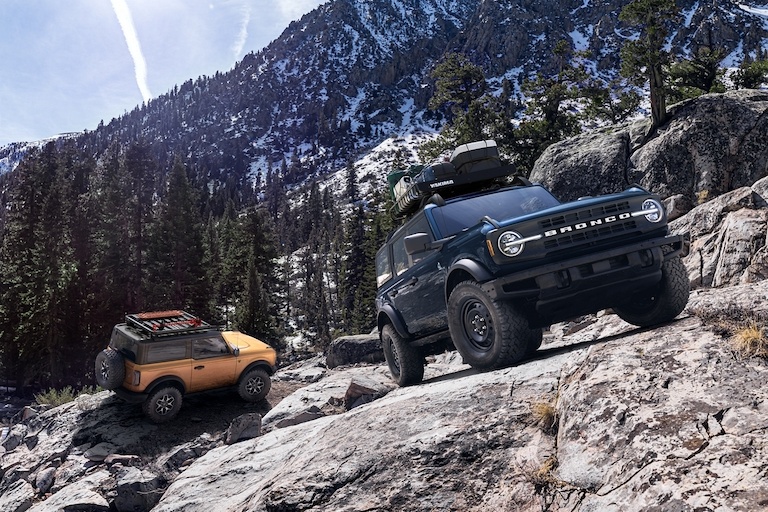 The soul of the Bronco line-up is equipped with Ford’s innovative 4x4 capability including a selectable temporary engagement mode that offers three different driving modes. While it should be noted that the optional manual transmission is available only with the 2-door, 2.3 litre version only. Both versions are available with the Sasquatch Package, which allows for the addition of 35-inch wheels. And, of course, a Bronco wouldn't be a Bronco without the removable roof and doors.

A little more refined, the Big Bend version has more luxury with its leather-wrapped steering wheel and shift knob and is equipped with an optional remote starter. It also adds further creature comforts with more roof and window options, a tubular running board, the multi-function Sync4 system, and a long list of on-board Ford electronic safety equipment.

Off-roading capabilities are off the charts in the Black Diamond edition. Decked out with reinforced skid plates which complement the standard modular front bumpers, tow hooks and roof rails. A rubberized floor is even added for easy clean-up with a hose after a short ride through muddy terrain. Want to take off-roading to the next level? The optional Sasquatch Package is tailored made for those who want to pair rugged adventures with the latest in driving automation the Co-Pilot 360 safety system. 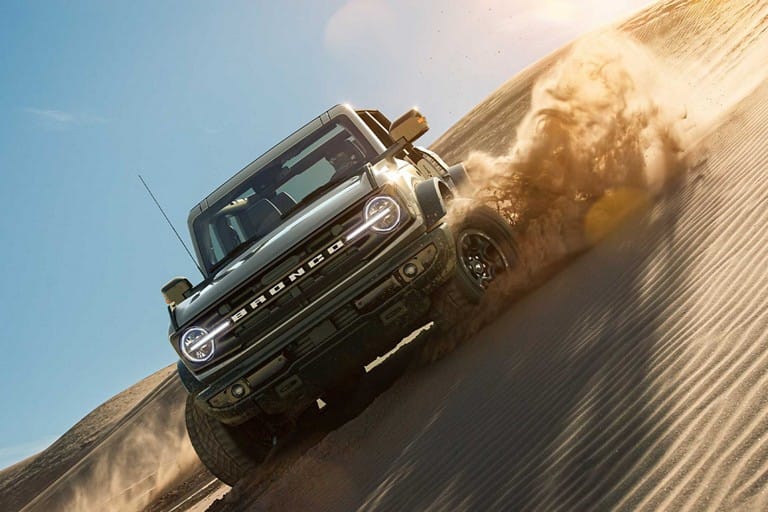 Comfort never takes the backseat with the Outer Banks, but it is the standard and optional off-road features that make it exceptional. With a high-clearance suspension, Trail Control for off-roading, Adaptive Cruise Control and an optional one-pedal drive you may customize the Outer Banks will be your guide on even the biggest of adventures.

The Badlands offers the GOAT (Go Over Any Terrain) system, an electronically controlled transfer case with a choice of driving modes that can take you just about anywhere over whatever terrain lies ahead. It adds a stabilizer bar which you can disconnect, and then automatically reconnect with a push of a button. The Badlands may look the part, but it has a softer side, with available dual-zone climate control, a 12-inch touch-screen with navigation, and a 10-speaker Bang & Olufsen audio system.

2021 FORD BRONCO SPORT: WHAT YOU NEED TO KNOW

The Bronco Sport was recently re-introduced. Smaller than its big brother the Ford Bronco, but almost as versatile, it is a small SUV that will delight urban drivers. It will also please the more adventurous driving enthusiast who likes to get off the beaten track. Its unique profile and its mechanical capabilities make it ready to face all conditions – while offering remarkable value for money.

All this in an SUV format that makes it accessible both as a family vehicle and as an outdoor companion for the most active. But don't be swayed because the Bronco Sport shares its platform with the Ford Escape. It's a true adventurer capable of tackling the most demanding roads – if the need – or the desire, arises. 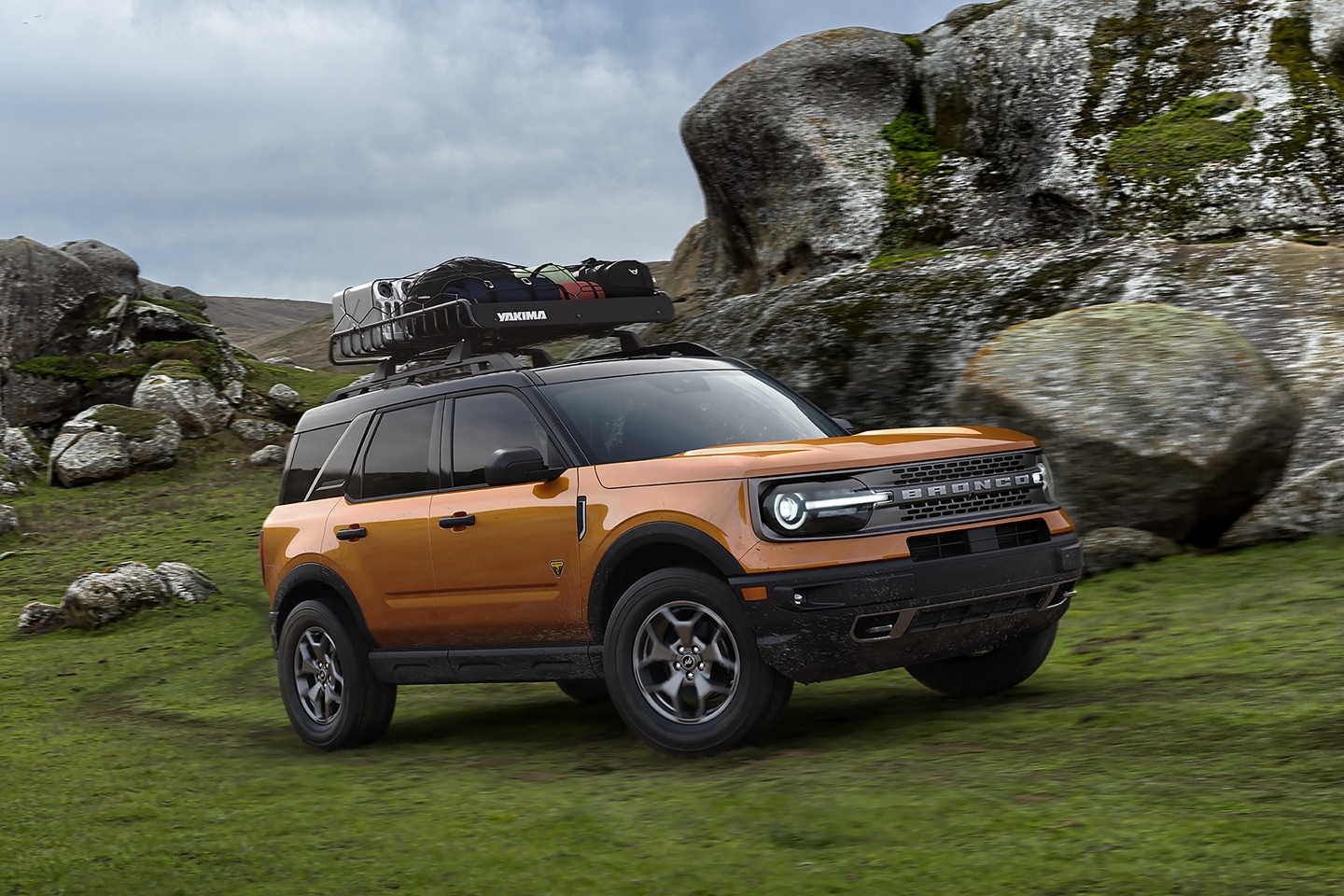 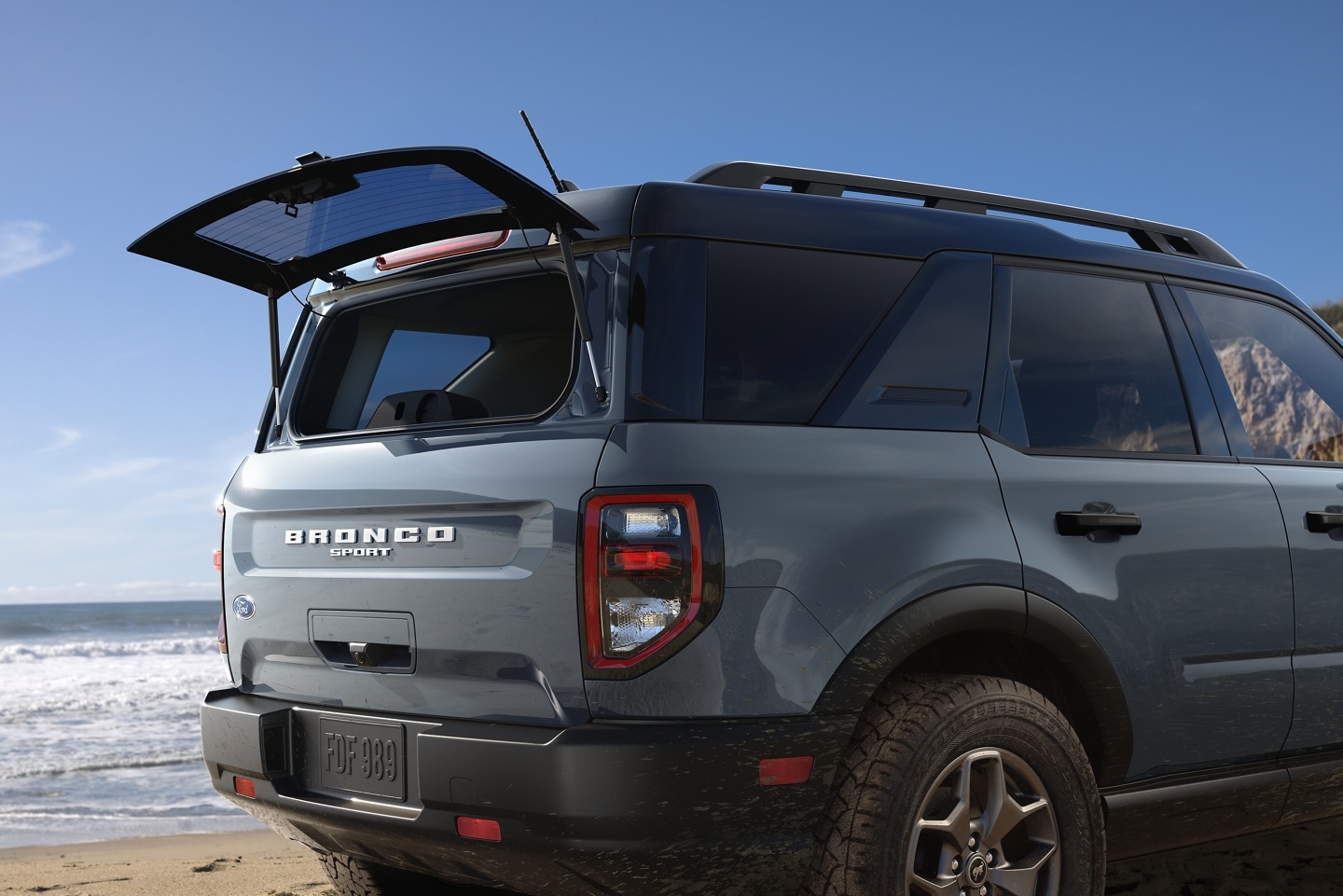 Physically, the Bronco Sport looks similar to its big brother, the Bronco. With square headlights, and an athletic silhouette, from the front, it has a similar configuration to the Bronco, with the badge and LED strip coming out of the headlights. The black plastic coating around the wheel arches and on the sides gives it more sporty look.

Don't look for a two-door version though. The Bronco Sport is only available in a 4-door configuration. However, fans will be able to give their Sport a unique look, as it is available in ten different colours. The Cyber Blast Orange, however, is only available for the top-of-the-range Badlands model.

The rear of the Bronco Sport is just as recognizable. It is equipped with a folding window and LED taillights.

Meanwhile, the interior is just as stylish as the exterior. The raised roof offers ample headroom, and the cargo area is the largest in its class and can accommodate two mountain bikes – if you have the optional accessory to do so! There's even a storage bin under the rear seat to store your muddy clothes once the ride is over. And some versions even have washable rubber floor mats!

The 2021 Bronco Sport's dashboard will be quite familiar to Ford vehicle enthusiasts. It features traditional controls as well as an 8-inch touch screen that houses the innovative Sync 3 multifunction system. Either Apple Car Play or Android Auto are also available, offering further convenient utility for the user.

Make no mistake, Ford designers and engineers have ensured that the Sport comes equipped with features designed to make it easy to drive. Of course, it has a rearview camera as standard, and a front-facing camera pointing to the trails, if necessary.

To make the possibility of off-roading even easier, the Bronco Sport also gets the GOAT (Go Over Any Terrain) system, a driving mode selector that allows you to select more extreme modes, such as Slippery, Sand, Baja, Mud and, Rock crawling. The latter is only available on the Badlands version, however. Of course Normal, Eco, Sport modes are also available. 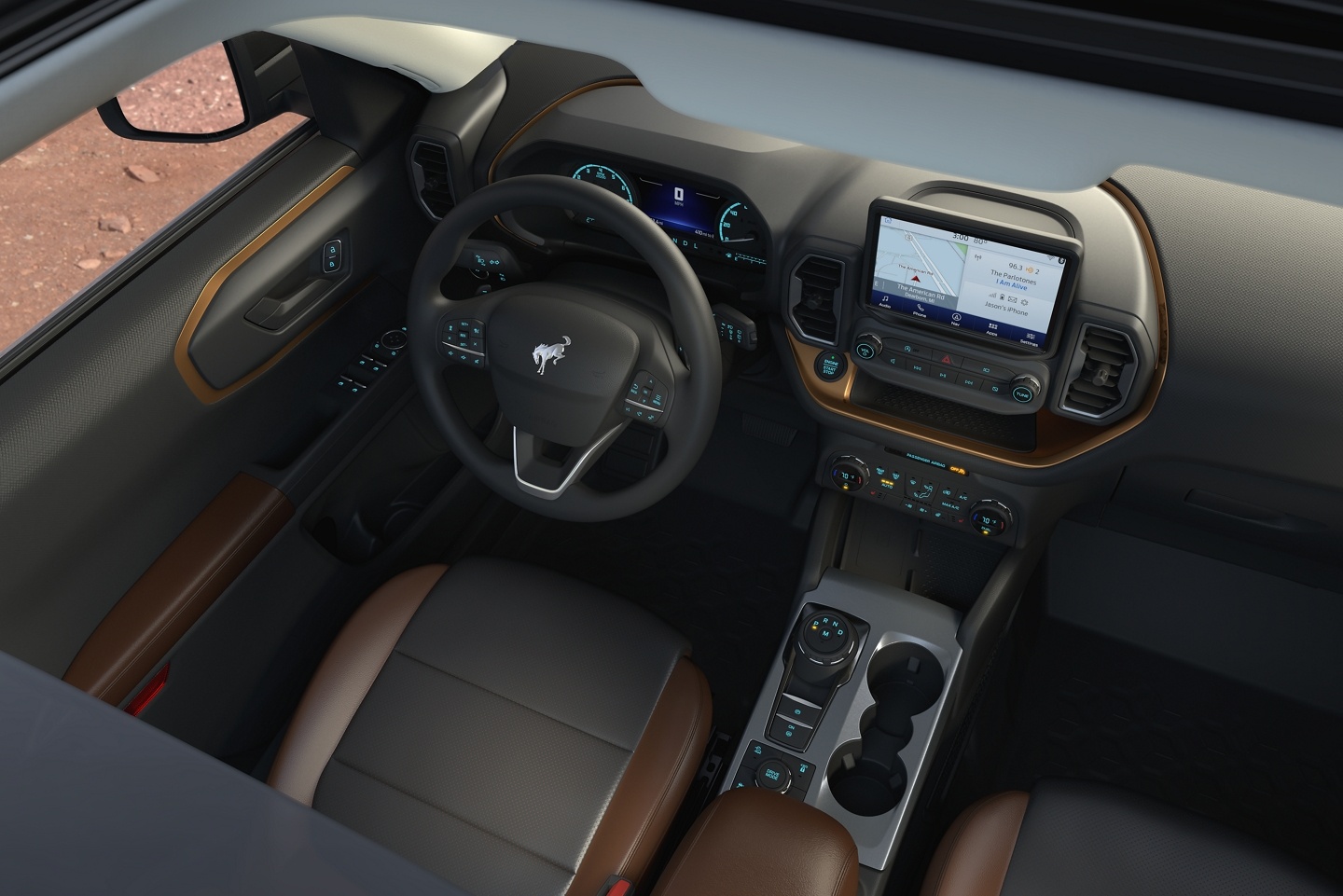 On the powertrain side, the Bronco Sport borrows two proven engines from the Ford Escape. With the exception of the Badlands version, all models come with a turbocharged 1.5-litre three-cylinder block. The result is 181 horsepower and 190 lb-ft of torque.

All Bronco Sport models come with standard all-wheel drive and an 8-speed automatic transmission. Towing capacities range from 2,000 to 2,200 pounds – depending upon the engine selected.

A total of four versions of the 2021 Bronco Sport are available: Base, Big Bend, Outer Banks and Badlands.

Time to make an appointment to view at your local Ford retailer?

Your Bronco is arriving soon to your Dealership - Click here to order a Ford Bronco customized just for you!